UnRiskIT™ offers the subsurface energy industries a powerful, yet easy-to-use, well cost and scheduling risk analysis software. Our unique and intuitive user interface is designed specifically for the energy professional and offers an efficient and consistent way to create an accurate risked drilling and/or completion AFE.

UnRiskIT™ has been developed and improved since 2004 and is used globally in both the Oil & Gas and Geothermal Energy Industries.

UnRiskIT™ was created for the purpose of simulating the execution of a process (in this case a series of related and unrelated drilling and completion events) while applying risks and uncertainty.

UnRiskIT™ performs a simulation of a modeled process by using the Monte Carlo simulation method while employing multiple statistic techniques that reflect variable behavior and correlation.

UnRiskIT™ is designed to meet the needs of Cost Engineers and provides powerful tools and unique techniques for producing accurate and consistent drilling cost estimates quickly and easily.

UnRiskIT™ is adaptable and can be used to model any series of events that experiences variability in cost and/or time. 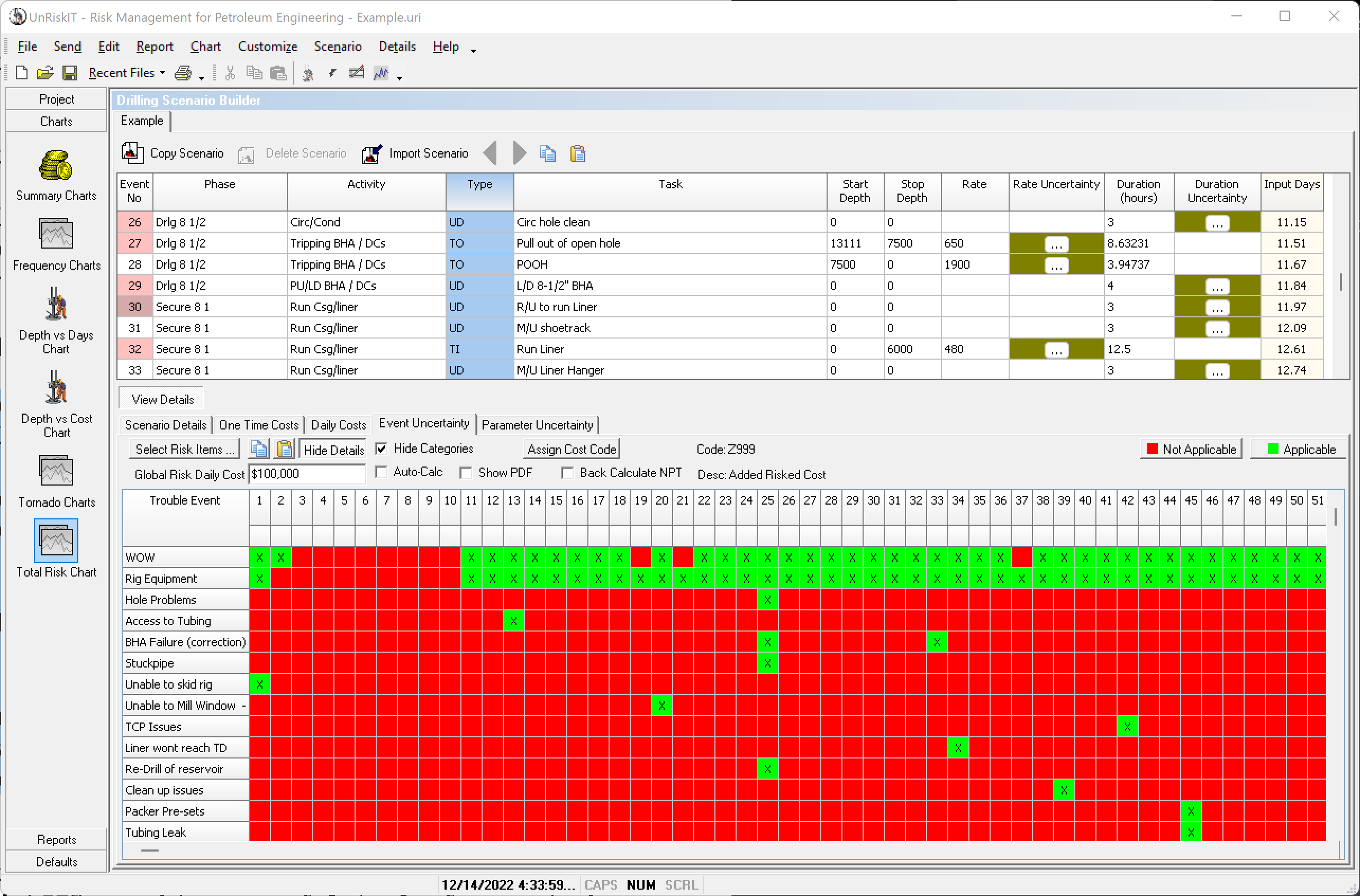 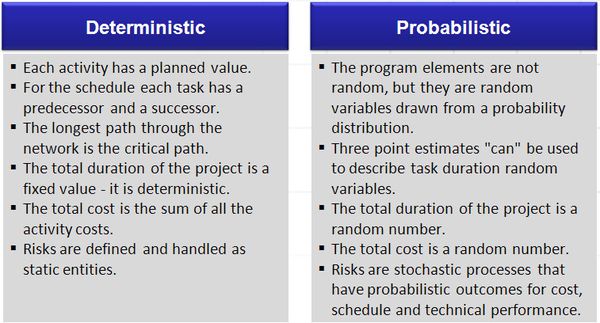 Monte Carlo simulation is a computational method that uses random sampling to perform mathematical calculations. It is a technique used to understand the behavior of a system by running many simulations with different input values, and then analyzing the results to see how the system is likely to behave in the future. Monte Carlo simulation is commonly used in a variety of fields, including finance, engineering, and the natural sciences, to model and analyze complex systems or processes. It allows analysts to make predictions about the likelihood of certain outcomes or to understand the factors that drive the behavior of a system.

UnRiskIT™ uses this technique to derive and illustrate the impact of risk and uncertainty in terms of cost and time.

Stochastic modeling is a mathematical method that uses randomness to model and analyze complex systems or processes. It involves representing a system or process as a set of random variables and using probability theory to study the behavior of the system over time. Stochastic modeling is commonly used in a variety of fields, including finance, engineering, and the natural sciences. It allows analysts to make predictions about the likelihood of certain outcomes or to understand the factors that drive the behavior of a system.

UnRiskIT™ uses this technique to derive and illustrate the impact of risk and uncertainty in terms of cost and time.

In general, risk is the likelihood or probability that something adverse or undesirable will happen. This can refer to a wide range of potential outcomes, from financial loss and physical harm to emotional distress and reputational damage.

Risk is an inherent part of life, and it is often necessary to take on some level of risk in order to achieve certain goals or benefits.

Risk analysis is a technique used to identify potential risks in a system, process, or project. It involves examining potential risks and evaluating their likelihood and impact in order to develop strategies to mitigate or eliminate those risks. The benefit of risk analysis is that it can help organizations to make informed decisions about how to handle potential risks and avoid negative outcomes. By identifying risks in advance, organizations can take steps to prevent or mitigate those risks, which can save time, money, and resources in the long run. Additionally, risk analysis can help organizations to build a culture of risk management, which can improve their overall decision-making processes and reduce the likelihood of negative outcomes.

It is important to carefully assess and manage risks in order to minimize their potential negative effects. We do this by (1) implementing controls to prevent risks from happening and (2) defining mitigating action to control the impact of a risk event.

Finally, it is important to perform after action reviews to determine if the controls in place and mitigation procedures were effective. Any lessons learned from this task must be brought forward and incorporated to the next well or project.

A risk register is a document or tool used to identify, assess, and manage risks in a project or organization. It is typically used by project managers to identify potential risks that could impact the success of a project, and to develop strategies for mitigating or eliminating those risks. A risk register typically includes information about each identified risk, such as its likelihood and potential impact, the actions being taken to mitigate or eliminate the risk, and any other relevant details. It is used to help project managers and other stakeholders track and manage risks throughout the project lifecycle. 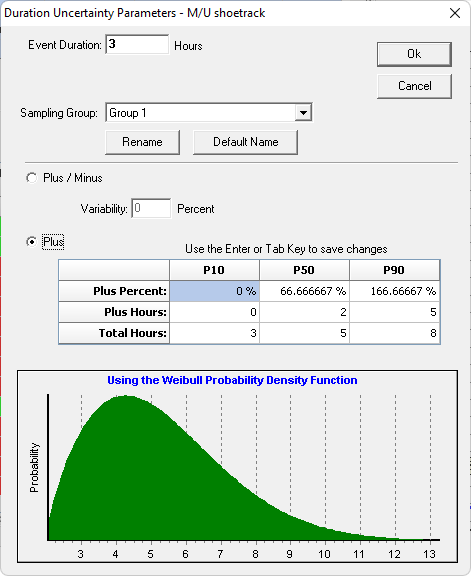 For example, if the CDF of a random variable X is given by F(x), then the probability that X is less than or equal to a value x can be found by evaluating F(x) at that value. 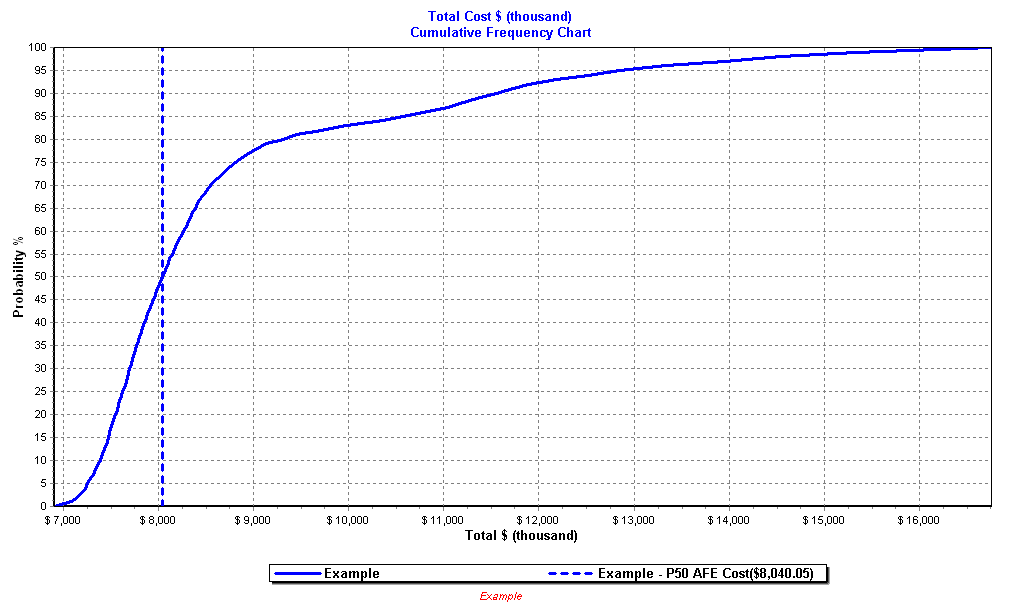 Correlation is the measure of how two or more variables are related to one another, also referred to as linear dependence. For example, an increase in demand for a product increases its price, also called the demand curve, traffic on roads at certain intervals of time of the day, the amount of rain correlates with grass fires, and so on.  The degree of correlation may range from No Correlation to Strong Correlation (+/-). <see below image> 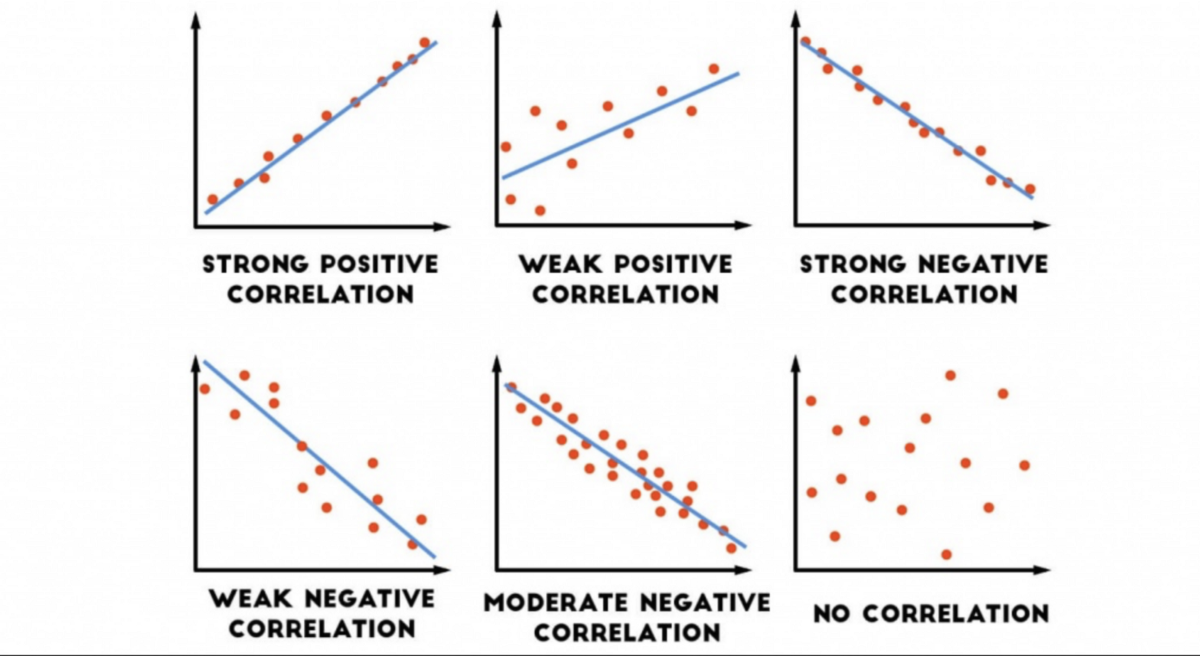 The degree of correlation between variables is crucial to accuracy because it essentially creates a bias behavior which reflects real-world outcomes. This is very important when we are considering multiple related and unrelated variables in a simulation.

A variety of Reports and Charts such as:

All of the reports and charts can be exported to standard office software applications.

Simply put, if you have a number of independent variables in a system then you will experience a narrowing of the cumulative variability as the number of variables increase. That range will likely appear too narrow and is often unacceptable or reasonable to you. This is a problem which needs further attention in order to derive real-world expectations.

To address this issue, we can define correlations between variables, making them dependent in some manner. For example, you may determine that as time increases with a particular drilling activity then the predicted risk/trouble associated with that activity may increase as well. Specific concerns may include wellbore stability, fluid loss, mechanical failures, bit wear and even a costly stuck pipe event.

UnRiskIT™ provides for a logical and transparent means to define these correlations which results in a more accurate and realistic range of possible outcomes.

Unlike other risk solutions, UnRiskIT™ is a standalone software program that is specifically designed for the energy professional. That means that you do not have to learn how to program or plug in generic functions; instead, with UnRiskIT™ you only have to create your logical flow of operations in terms and language that are familiar to you and your team.